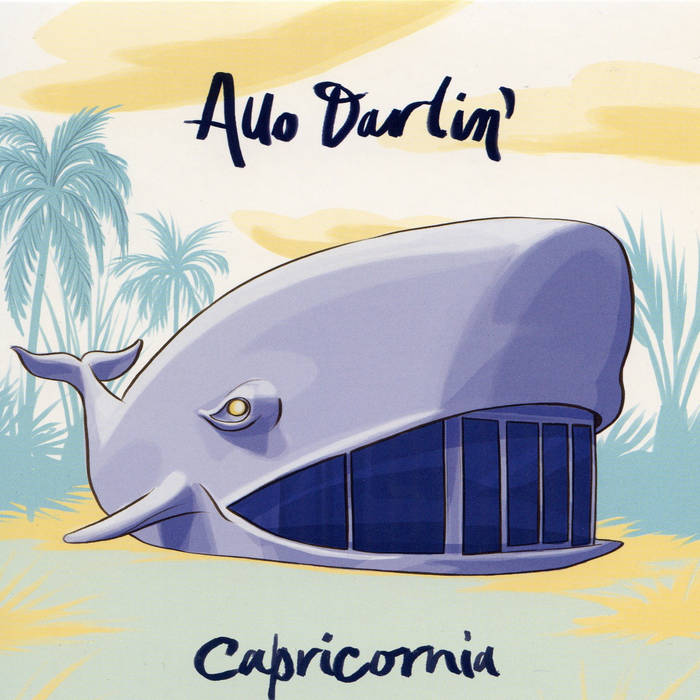 “Capricornia” is the first single from the eagerly anticipated second album from Allo Darlin’ entitled Europe. Achingly personal, incredibly poignant and familiar all at once, Elizabeth Morris’ songwriting has deepened and developed since their debut, and while the upcoming album may have a more sombre feel to it “Capricornia” shows that they’ve lost none of their ability to create sophisticated, intelligent pop music with an uplifting, joyous feel. And for those of you wondering exactly what Capricornia is all about, Elizabeth explains:

“Capricornia is the area in Queensland that I'm from. It has imaginary state lines, roughly around the Tropic of Capricorn, which runs directly through my hometown. There's a nice 70s monument that marks the spot where the line passes, out on a lonely dirt road where all the kids learn how to drive. My family have lived in this area for over 6 generations but none of my generation remain. It’s a beautiful place.

Musically, when we first discussed the album with our producer, I suggested that the feel of Europe should be somewhere between A New England by Kirsty Macoll and Cattle and Cane by The Go-Betweens. I think this song is the closest to that.”

"Ah, Australia. Home of drought, locust plagues and swaggering brigades of beetroot-faced drunks. But to Elizabeth Morris, folksy vocalist with Queensland’s Allo Darlin’, Oz is a magical place, zinging with romance. ‘Capricornia’ is a sentimental hymn to her hometown. It’s also an uplifting acoustic jangle that will remind you of Kirsty MacColl, the start of summer, and a glinting open road ahead." NME

"A streamlining of everything that made Allo Darlin' special on album number one into a song that's so pretty that it feels as though it's been around forever. Referring to an area of Queensland it aptly reflects shimmering sun and wide open skies. Jangly guitars hit their mark and the influences of Kirsty MacColl and The Go-Betweens, that were apparently key touchstones for Europe as a whole really do shine through. But there's only really so much that can be said about 'Capricornia', it's such an immersive and perfectly pop experience that listening is the only way to do justice." Keep Pop Loud

"Originally the solo project of London-based Australian Elizabeth Morris ('Capricornia' is named after her hometown), Allo Darlin's rise to becoming indie darlings has been a significant one since their 2010 debut album, taking in US and European tours and capturing the hearts of many. This first taster of the forthcoming follow up is only likely to increase their fanbase further. Musically the idea for second album 'Europe' was to be "somewhere between 'A New England' by Kirsty Macoll and 'Cattle And Cane' by The Go Betweens". 'Capricornia' suggests that, in that respect, it could be mission accomplished.

Both tracks on this single display a more grown up sound, but rest assured, none of their sunny sparkle has been discarded along the way. The a-side is pure, driven melody that strums and jangles in a way that flips the bird at any accusations of sickly tweeness, falling more into the 'timeless classic' bracket. B-side 'When You Were Mine' is not to be sniffed at either, being another example of wonderful indiepop songwriting. It's too good to be buried as a b-side, essentially making a purchase of this single the best plan of action, as opposed to just streaming the a-side online. The album could be a cracker." SoundsXP

Recorded by Rob Ferrier at Analogue Cat and Brian O'Shaughnessy at Bark.

"Capricornia" mixed by Brian O'Shaughnessy, "When You Were Mine" mixed by Simon Trought.

Bandcamp Daily  your guide to the world of Bandcamp

Benji B talks about his new compilation ‘Deviation Classics’